I’m very proud to announce the completion of my first programming language compiler!

Malcc is an incremental and ahead-of-time lisp compiler written in C.

This is the story of my progress over the years and what I learned in the process. An alternate title for this post is: “How to Write a Compiler in Ten Years or Less”

(There’s a TL;DR at the bottom if you don’t care about the backstory.)

I have dreamed of writing a compiler for nearly a decade. I’ve always been fascinated by how programming languages work, especially compilers. Though, I imagined a compiler as dark magic and understanding how to make one from scratch firmly out of reach for a mere mortal such as myself.

But that didn’t stop me from doing and learning!

In 2011, I started work on a simple interpreter for a made-up language called “Airball.” You can tell from the name how much confidence I had in myself to make it work. It was a fairly simple program written in Ruby that parsed the code and walked the abstract syntax tree (AST). Once I realized it did kind of work, I renamed it Lydia and rewrote it in C to make it faster.

I remember thinking the syntax for Lydia was quite clever! I do still enjoy the simplicity of it.

While Lydia was far from the compiler I wanted to make, it was a small taste that inspired me to keep going. Though, I was still plagued by unanswered questions of how to make a compiler work: What do I compile to? Do I have to learn assembly language?

Second, a Bytecode Compiler and Interpreter

As a next step, in 2014, I started work on my scheme-vm – a virtual machine for Scheme written in Ruby. I thought using a VM with its own stack and bytecode would be a nice middle-ground between an AST-walking interpreter and a full compiler. And since Scheme is formally specified, I wouldn’t have to invent anything.

I tinkered off-and-on with my scheme-vm for over three years and learned a lot about how to think about compiling. But, in the end, I knew I couldn’t finish it. The code was becoming an unmaintainable mess and I still had a long way to go to completion. Without a guide or previous experience, I was mostly feeling my way around in the dark. It turns out that a language specification is not the same as a guide. Lesson learned!

By the end of 2017, I had shelved scheme-vm in search of something better. 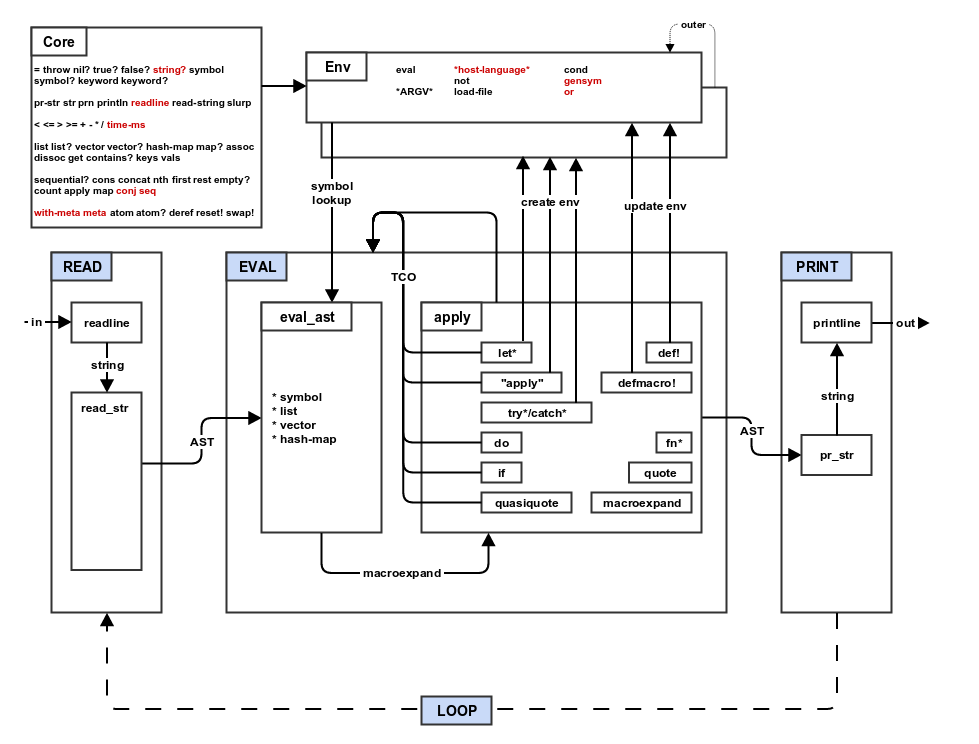 Some time in 2018 I happened across Mal, the Clojure-inspired Lisp interpreter.

Mal was invented by Joel Martin as a learning tool and has since gathered over 75 implementations in different host languages! I knew when I saw all those different implementations that I could learn a lot about the process – if I got stuck, I could go consult the Ruby or Python implementation for cheats. Finally, someone who speaks my language!

I also figured that if I could get through the steps writing an interpreter for Mal, I could probably repeat those same steps to make a compiler for Mal.

A Mal Interpreter in Rust

My first go was to follow the step-by-step guide and build an interpreter. At the time, I was also heavy into learning Rust (I’ll save that for another blog post), so I created my own implementation of Mal in Rust: mal-rust

I wrote a bit about my time using Rust here.

This was an absolute joy! I cannot give enough praise or thanks to Joel for creating the excellent Mal guide. It has detailed written steps, flowcharts, pseudocode, and tests! – everything a developer would need to make a programming language from start to finish.

A Mal Compiler in C

Once I proved mal-rust to be a viable Mal implementation, I started researching how I could write a compiler. Do I compile to assembly? Do I dare compile directly to machine code?

I saw an x86 assembler written in Ruby which intrigued me, but the thought of working with assembly gave me pause.

At some point I happened across this comment on Hacker News, which mentioned using the Tiny C Compiler as a “compilation backend.” This seemed like a great idea!

TinyCC has a test file showing how to use libtcc to compile a string of C code from a C program. This gave the start I needed to build a “hello world” proof of concept.

Starting again with the Mal step-by-step guide, along with my stale C experience, I was able to build a Mal compiler in a couple months worth of spare evenings and weekends. The process was a joy. 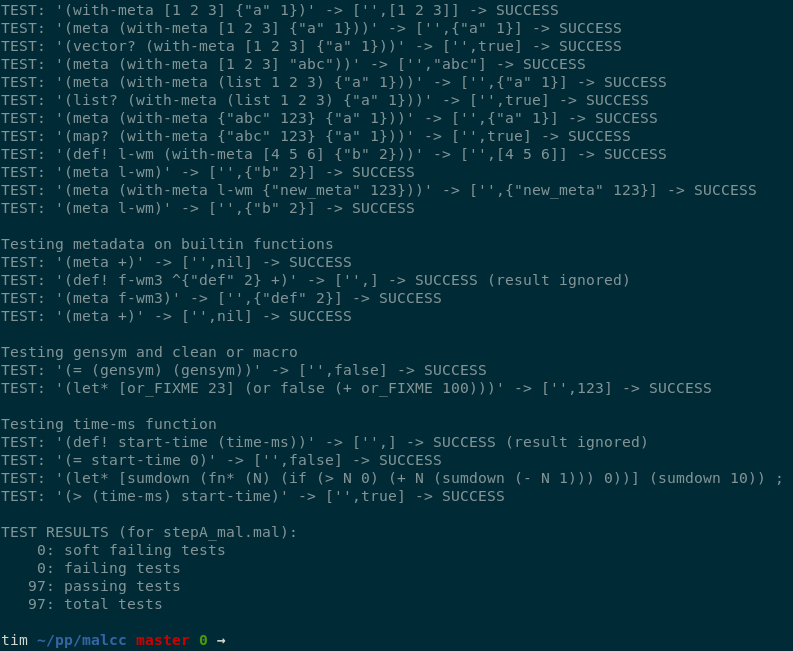 If you’re used to test-driven development, you’ll recognize how valuable having a pre-done test suite is. The tests will guide you toward a working implementation.

I can’t say much about this process, other than, again, the Mal guide is a treasure. At each step, I knew exactly what what I needed to do!

Thinking back, here are some tricky bits specific to writing a Mal compiler that I had to figure out:

I love that it’s taken me nearly a decade to learn how to make a compiler. No, really. Each step along the way is a fond memory in my process of becoming a better programmer.

That’s not to say I’m “done” though. There are still many hundreds of techniques and tools I need to learn to feel like a real compiler writer. But I can confidently say “I did it.”

Here is the process I’d recommend to make your own Lisp compiler:

I believe this technique can be used with just about any programming language that compiles to an executable. For example, one could:

Ideally, there’d be a way to control the Go compiler as a library rather than shelling out, but regardless, this is one way to make a compiler!

With the Mal guide and your ingenuity, you can do it. If I can do it, so can you!

Many thanks to Joel Martin for creating Mal and giving it to the world!